Back in December 2021, we began covering SA’s first attempt to summit K2, following John Black, Warren Eva, Allan Dickinson and Robby Kojetin as they prepared to make this dream reality. Now eight months later, John Black is back on home soil to tell us all about their incredible adventure … and how they made South African mountaineering history.

Most readers would have been following our story in your earlier newsletters, and would have read in the last issue that we had made it to the summit. This is a summary of our expedition. Keep your eyes out for the 2022 journal for all the details of our climb to the top of Pakistan!

What started off as a fascination 25 years ago turned into a goal about 10 years ago, and then became a reality when we left home on June 13, 2022 to travel to Islamabad, Skardu, and then Askole, and finally make the 100km trek to K2 Basecamp (BC). While long and exhausting, the travel and the stopovers all went well—but our trek started off badly, when most of our team got food poisoning. This split the following day’s trek into two days, to allow our depleted bodies to recover.

The trek to K2 is renowned for both its beauty and its brutality. It lived up to its reputation as an undertaking that is not to be underestimated—and its rugged beauty was indeed staggering. Nothing prepares you for how steep the Karakoram is until you are there. So many peaks we have read about, so much history, and so much tragedy…. The first views of K2 from Concordia were literally breath-taking. Seeing K2 in the flesh is a moment to remember—it’s both spectacular and frightening in equal measure, and we stared at it for the next 11km trek to BC. The skies were clear, and remained so for many days.

We arrived at Basecamp and immediately set about readying ourselves for many weeks in and above it. A few days later, we did our first load carry to Camp 1 (C1). It was a rude awakening—not only because of the altitude jump from 5000m to 6200m, but also because of the terrain. This task demanded a sustained level of climbing, due to the exposure and steepness on the mountain. We deposited gear at C1 and returned to BC the same day, in a 12h-hour roundtrip journey. Robby fell ill, and the next day was evacuated from BC in a chopper.

“By 10pm we were on the trail, climbing up the shoulder by the light of our headlamps.”

We spent four days in BC before doing another rotation and carry up to C1, where we slept a night. Then we went up to Camp 2 (C2, at 6700m) for two nights, and then made it back to BC. Both C1 and C2 were incredibly exposed and precarious, and the route was steep the entire way. The famous House Chimney was a “fun” challenge. Back in Basecamp, we rested for a few days. We were planning a third rotation and load carry up the mountain, but bad weather set in and bogged us down in BC for over two weeks. When the weather finally cleared, it was very late in the season and the window of opportunity for another acclimatisation rotation had all but shut on us. We decided to embark directly on a summit rotation, and to just carry more than planned. During our rotation, Allan decided to not proceed above C1, and instead remain in BC in a support and communications role.

With many hundreds of butterflies in our stomachs, Warren and I left Basecamp on 18 July, retracing our steps to C1 for a night, then on to C2 for a night before proceeding up to Camp 3 (C3) via the Black Pyramid. A very, very tough day indeed. We spent a night in C3 (at 7100m), and the next day climbed towards Camp 4 (C4) using oxygen. 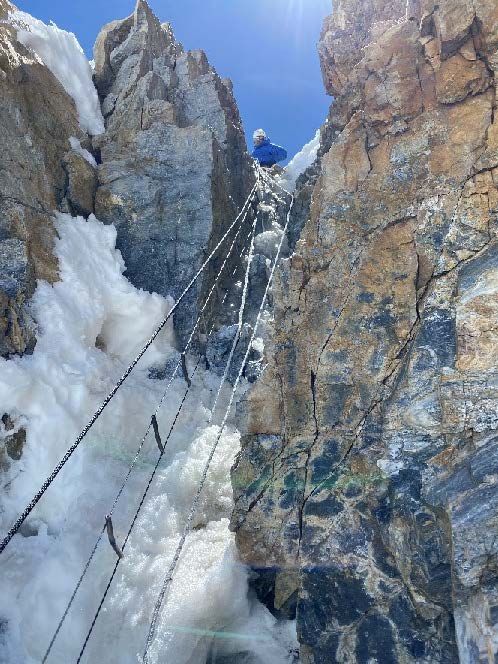 Having studied the mountain for many years, it was amazing to be seeing and experience all the places I had read about. We arrived at C4 (at 7700m) quicker than expected—we’d been under the impression that it was at 7800-7900m. This was disappointing, as it meant a longer summit day. Having arrived in the early afternoon, we set up camp and rested. As had become customary over the last week, the wind picked up at around 6pm and howled non-stop. The wind was too high for a safe summit, but we expected it to calm at around 1am. To our surprise, the wind abated at 9pm—and we decided to leave ASAP to try and avoid the crowds. By 10pm we were on the trail, climbing up the shoulder by the light of our headlamps. 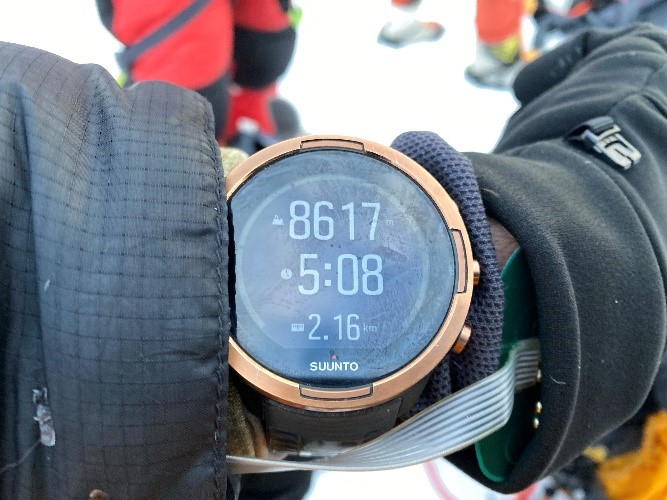 We arrived at the Bottleneck a while later, and began climbing up what we knew was the start of a very dangerous section. Warren and I had promised to move as quickly as we could, and we made great progress up the Bottleneck with its infamous serac hanging ominously above us. Still in the dark, we crossed the extremely exposed and perilous traverse before turning and climbing up the snow gully and ramp for what would be some incredibly challenging climbing—first through loose, sugar snow that made getting any purchase very difficult (and which provided us with a few minutes of heart-stopping fear when one anchor popped and a second started to migrate out). Having overcome that near-disaster, we moved into 2-3 pitches of very tricky blue ice, followed by a stretch of more reasonable climbing towards the summit ridge. Here we met a spectacular sunrise view over the Karakoram. At around 5am, we finally arrived—in time for a perfect summit morning with brilliantly clear views. 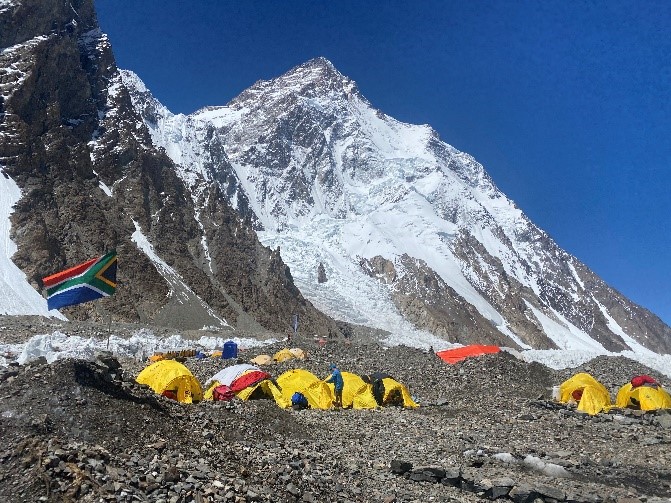 Twenty minutes later we were descending, knowing full well that this was going to be a very dangerous two days down. The constant rock fall danger that K2 presented was even more real on descent, facing away from the mountain. We dropped to C2 that night, and decided that to continue down in the dark would be madness. We would not be able to hear the falling rocks (and there were many… all day long).

After an early start, we descended down to C1—to find a second tent of ours destroyed by falling rock, exactly where we had slept. It was only back in Advanced Basecamp (ABC) that we felt safe enough to breathe a sigh of relief and celebrate our success. Then it was time to tackle the 2.5-hour trek down to BC, which was exhausting with our nearly 30kg packs.

After three days in BC sorting out logistics, we departed for Concordia, Ali Camp, and then ascended up and down the Ghondoroko Pass (5600m). The 1000m of climbing and 40km trek on day two took 19 hours, and we paid the price for condensing a four-day trek down into two. The trek out and the travel home gave us some time to process our experiences over these intense nearly eight weeks.

Warren Eva and I had finally put South Africans on top of K2. We are elated to add a little bit to South African mountaineering history, and to provide a good story back home. The interest and media coverage of our expedition far exceeded our expectations. Many thanks to the MCSA for their support, as well as to my sponsors: Leatherman, Ledlenser, The North Face, Trappers, Stanley, and Suunto. ▲ 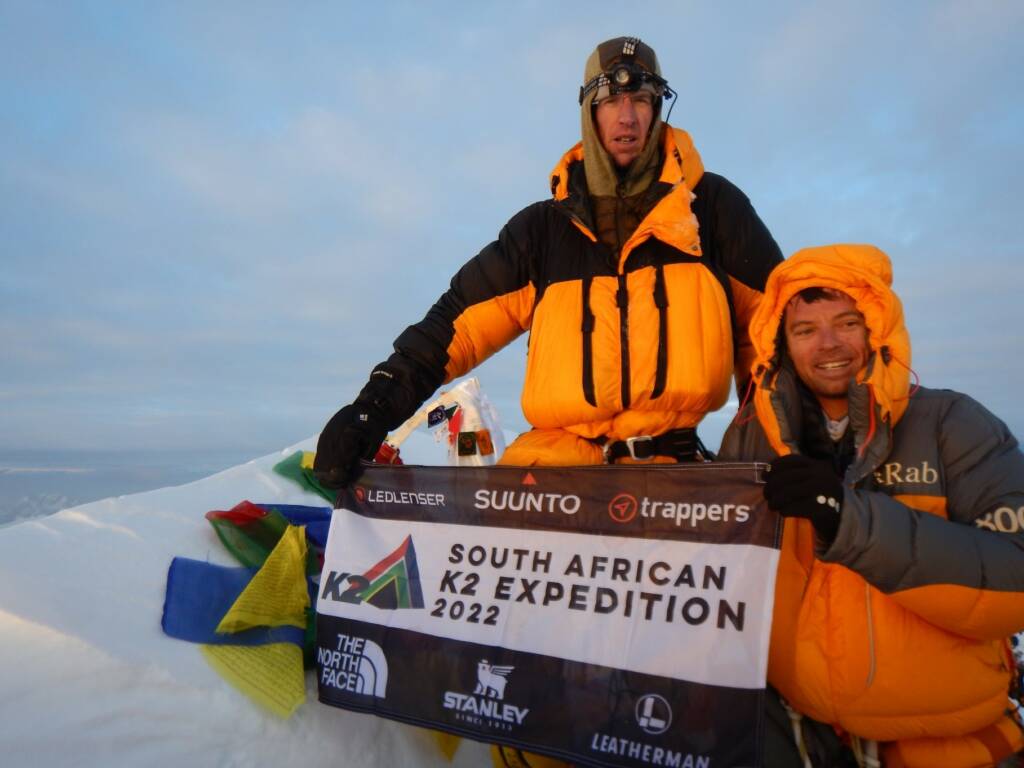